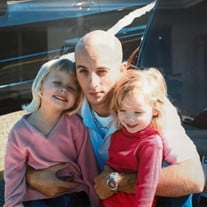 William Blaine Bobby Douglas, 42, of Hackberry, Arizona, passed away unexpectedly on Thursday, 3 February 2022, while surrounded by family in Phoenix Arizona. Blaine enlisted in the United States Army in 1998. Throughout his career as an Intelligence Analyst, Blaine served his nation both stateside and in deployed operations overseas, having fought in Operation Iraqi Freedom and Operation Enduring Freedom in austere conditions and in combat environments. Blaine earned numerous awards and medals, culminating in his award of Army Commendation Medal, Third Oak Leaf Cluster, upon his retirement from honorable service in the U.S. Army as a Sergeant First Class on 28 June 2008. Blaine was courageous, unafraid to stand up for his country, his convictions, his soldiers, and his family. Blaine was notorious as someone to be counted on for all those around him. Blaine had a great passion for leading and developing soldiers. During his Army career, he became an instructor and mentor. He also enjoyed working with cars and motorcycles, having won many show awards. Blaine loved his family and friends, he brought smiles and laughs daily throughout his life, and was known for his wit and charm. Most of all, Blaine loved his two children, Cailey and Chloe; and prided himself in placing them first throughout his life. Blaine is survived by his mother, Linda Finch of Hackberry, Arizona; his brother Phillip Douglas of Jemison, Alabama; his sister Tami Douglas of Clarksville, Tennessee; his two children Cailey Douglas and Chloe Douglas of Holtville, Alabama, and his niece Abigail Douglas of Nashville, Tennessee. Arrangements for Blaine are visitation, Saturday, 19 February from 1:00 to 2:00, service following at 2:00, at Prattville Memorial Chapel. Graveside service will be immediately following Procession to New Home Missionary Baptist Church in Elmore. Prattville Memorial is in charge of arrangements, and flowers in memory of Blaine may be sent to their address.

William Blaine Bobby Douglas, 42, of Hackberry, Arizona, passed away unexpectedly on Thursday, 3 February 2022, while surrounded by family in Phoenix Arizona. Blaine enlisted in the United States Army in 1998. Throughout his career as an Intelligence... View Obituary & Service Information

The family of William Blaine Bobby Douglas created this Life Tributes page to make it easy to share your memories.

Send flowers to the Douglas family.