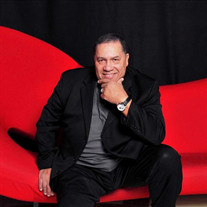 ROBERT MICHAEL “BOB” FUENTES Robert M. Fuentes of Millbrook, AL, departed this life on July 16, 2020, at Prattville Baptist Hospital. He was born August 11, 1944, in Bronx, NY, to the union of Julio and Bessie (Le Compte) Fuentes. He proudly served his country in the United States Army from 1970 to 1989. After he retired from the Army, he dedicated 20 years of service as a federal employee retiring in 2014. Bob was united in marriage to Gloria Campbell in Jun 1971; she preceded him in death in Oct 2014. In May 2015, he married Ann Jennings who he showered with love until his final breath. Bob loved to volunteer and give back to others. Some of the organizations that he devoted his time to were Habitat for Humanity in Pinehurst, NC, The Welcome Center and The Senior Citizen Center both located in Millbrook, AL along with other volunteer services at his church. Bob was a born again believer in Jesus Christ and spreading God’s Love and Word to everyone was his passion in life. He never met a stranger. He was proceeded in death by his parents, Julio and Bessie (Le Compte) Fuentes, first wife Gloria, a daughter, Xenia, and a brother, Julio. Surviving in addition to his wife, Ann, are his sons Michael (Tracy), Marcus (Erin), and Glenn (Regina), daughter Tatiana, sister Lizbeth Fuentes, brother Danny Fuentes; in his union with Ann he gained two additional sons Chris (Karla) and Jody (Tina); three additional daughters Crystal (Stan), Tiffany (Eric), and Atlantis (Dexter); thirty-one grandchildren; seven great grandchildren; two nephews; three nieces and a host of other relative and friends. A service of remembrance will be held 1 p.m. Tuesday July 21 at Prattville Memorial Chapel 841 Fairview Avenue Prattville, AL 36066. Visitation will be same day from 12 p.m. to 1 p.m. Interment will be at Alabama National Cemetery Montevallo, AL. Those who wish to make any monetary donations can contact his wife, Ann Fuentes. Flowers can be sent to Prattville Memorial Chapel. Honorary Pallbearers Stan Mays, Zack Warren, Michael Tuno, Stephen Northington, John Cain, Quintin Johnson, Lamar Rhodes, Michael Edwards, Ken Talley, Larry Andrews, Ron Gordon, and Bill Phillips.

The family of Robert Michael Fuentes created this Life Tributes page to make it easy to share your memories.

Send flowers to the Fuentes family.