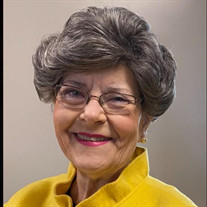 Peggy Newbern Hammond, follower of Christ and beloved wife of Harold J. Hammond, passed into the arms of her Lord and Savior at the family home on Monday, May 16, in Prattville after a lengthy battle with cancer, a battle she fought in the same way that she lived, with grace and gentility. In addition to her husband, Harold, Peggy leaves behind her son, Alan Hammond, MD (Kathy) of Memphis, their sons, William Hammond, MD and John Hammond of Memphis, Christian Hammond of Dallas, and her son Greg Hammond (Alena) of Raleigh, their daughters Elizabeth Hammond and Abby Hammond of Raleigh, and Katherine Hammond of Charlotte. Peggy is also survived by her aunt, Millie Connor, of Fayetteville, Tennessee, as well as nieces, nephews, cousins, and a host of treasured friends. Peggy was welcomed into the family of Ralph and Essie Curtis Newbern and son, Jerry, in Lawrenceburg, Tennessee, on January 4, 1946. After moving to Florence at an early age, she received her family’s Christian faith as her own at the age of nine and was baptized into the fellowship of Highland Baptist Church. Peggy’s discovery of her love of music during her childhood birthed a lifelong devotion to music as a channel of joy, worship and service. Joining the newly formed Underwood Baptist Church in Florence at age twelve, Peggy persuaded her parents and the music director to allow her to join the adult choir. The glee club and theater program at Rogers High School and choral festivals in Alabama and Tennessee offered Peggy yet more opportunities to increase her musical repertoire. Music was not the only avenue through which the fellowship of Underwood Baptist Church changed the course of Peggy’s life. Harold Hammond was a fellow church member who, by his own admission, was smitten with Peggy from the moment he saw her. They married on April 17, 1964. Their friendship and courtship continued through fifty-eight years of marriage as they celebrated their anniversary on Easter Sunday 2022. Harold’s work assignments with the Department of Public Safety brought them to Prattville in 1972. Peggy served the Lord there through her commitment to Prattville’s First Baptist Church, particularly in its music ministry where she celebrated her fiftieth anniversary as a member of the choir in March 2022. In addition to pursuing post-secondary education at Troy University and Auburn University at Montgomery, Peggy worked as an executive assistant at the Prattville Chamber of Commerce and then as a ministry assistant at First Baptist Church. She then accepted appointments to serve in several departments in the government of the State of Alabama. She ended her professional career as a cost analyst for Lockheed Martin Corporation in 2006. Since her retirement and in addition to her ministries at First Baptist Church, she has enjoyed active participation in the Francis Marion Chapter of the Daughters of the American Revolution, the Yaupon Garden Club, the Askesis Study Club, Autauga AARP, Gideons International, Prattville Community Chorus, and the River Region Sacred Music Festival. To her family, friends, fellow church members, and professional colleagues, Peggy has been a constant source of faithful support and unfailing kindness. Her joyful optimism reflected her firm roots in her faith in Christ. Each of her children, daughters-in-law whom she loved as her own children, and grandchildren were blessed by her unconditional love, generosity, and hospitality. While her travels took her around the world and her Christian, professional, and civic affiliations gave her joy, her family knew beyond doubt that her love for them was rivaled only by her love for her Lord. A visitation will be held at First Baptist Church, 138 S. Washington Street, Prattville on Friday, May 20, 2022 from 12:30 p.m. to 2:00 p.m. followed by the funeral service at 2:00 p.m. Burial will follow at Prattville Memory Gardens, 841 Fairview Avenue. Pallbearers will be fellow choir members Carl Salle, Chris Barrineau, Doug Johnson, Mel Johnson, Logan Smith, and Ralph Pierce. Members of First Baptist Church’s choir will serve as honorary pallbearers. In lieu of flowers, friends may consider a memorial gift to one of the following: Music Ministry, First Baptist Church, 138 S. Washington Street, Prattville, Alabama 36067 and The Gideons International, P.O. Box 681371, Prattville, Alabama 36068.

Peggy Newbern Hammond, follower of Christ and beloved wife of Harold J. Hammond, passed into the arms of her Lord and Savior at the family home on Monday, May 16, in Prattville after a lengthy battle with cancer, a battle she fought in the same... View Obituary & Service Information

The family of Peggy Ann Hammond created this Life Tributes page to make it easy to share your memories.

Peggy Newbern Hammond, follower of Christ and beloved wife of...

Send flowers to the Hammond family.