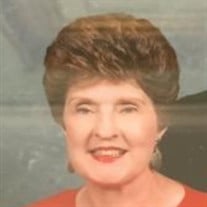 SMITH, Martha Ann Slade, age 81, died peacefully at home on Wednesday afternoon, May 22, 2020 in Prattville, AL after battling Semantic Dementia for six years. Martha is survived by her husband, Captain Marvin “Jack” Smith, Jr., (Ret) USN; son, Kevin G. Smith and grandson, Gaines of Memphis, TN; daughter, Karen A. Smith Garcia (Gil) and grandchildren, Dylan and Anna of Vilanova, Spain; two brothers, Gaines Slade (Ina) of Pintlala, AL and Winifred Salde of Magnolia, AL; two sisters, Onie Slade Nelson of Auburn, AL and Judy Slade Walters (Marcus) of Nanafalia, AL; extended family and friends. She was preceded in death by her parents, Jack and Bly Slade of Magnolia, AL. Martha was born on March 9, 1939 in Magnolia, AL. She graduated from Thomaston High School in 1957 with honors and attended Livingston College in western Alabama. As the oldest child, Martha became a surrogate Mom while her parents both worked away from home. She discontinued her education and chose to work to help her family. While employed in Montgomery, AL she met and married naval officer LCDR Smith (fresh out of the war in Vietnam) in 1967 while he attended Air Command and Staff College. After twelve years of marriage to Jack and his six different assignments/locations, she was a busy homemaker with two young children and enjoyed the role of “stay at home Mom”. At that point Martha and Jack retired from the Navy and chose Prattville as their retirement location where they raised their children, always encouraging them to succeed in school and to pursue their goals. Martha loved people and was a warm and generous person. She was an active member of the First United Methodist Church, the Ladies Service league, the Sosia Women’s Club and The Red Hatters. The family would like to thank the caregivers, the Baptist Hospice team and all our wonderful church families and neighbors who provided so much delicious food. Due to the corona virus panademic, a normal funeral will not be held. A celebration of Martha’s life at First United Methodist Church will be scheduled in the future. Martha will be laid to rest at Prattville Memory Gardens on Thursday, May 29, 2020 with Rev. Tony McCullough officiating with family members only attending.

The family of Martha Ann Slade Smith created this Life Tributes page to make it easy to share your memories.

Send flowers to the Smith family.