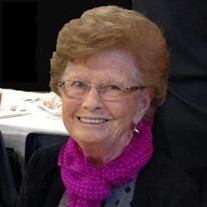 Netzhimer, Loretta Jane, a resident of Deatsville, AL, went home to the Lord on Friday, November 6, 2020. Funeral services will be held on November 12, 2020 at 11:00 a.m. at St. Joseph’s Catholic Church in Prattville with Father James Dean officiating. A visitation will be held one hour-prior to her service on Thursday. Burial will follow in Alabama National Cemetery in Montevallo, AL. Mrs. Netzhimer was an amazing, smart and caring Christian women. Although she was small in stature, she had a giant heart that was filled with love, kindness, compassion and generosity. Loved by all who met and knew her, she had a marvelous sense of humor, had an incredibly sweet personality, possessed unceasing energy and was very quick-witted. She was married for over 60 years and was totally devoted to her beloved husband William (Bill) Netzhimer until he predeceased her in 2013. Prior to his death, the two of them raised five children and eventually the family grew with the addition of three-sons-in law, one daughter-in-law, eleven grandchildren and one great grandchild. Originally from New Jersey, she and her family moved to South Daytona, Florida where they resided for 35 years before she settled in Alabama eight years ago. A prayer warrior, Mrs. Netzhimer was an active member of St Joseph’s Catholic Church and also formerly served the Lord as a Lector and Lay Eucharistic Minister at the Catholic Church of the Epiphany in Port Orange, Florida. Over the years, Mrs. Netzhimer enjoyed raising her family, sewing, bowling, reading, crossword and jigsaw puzzles, volunteering with children at schools, traveling and spending time with family, friends and especially her grandchildren. In addition to losing the love of her life, Bill, she is also preceded in death by her two precious sons: William J. Netzhimer and Carl Joseph Netzhimer. She is survived by her three daughters Loretta Jane (Roger) Judy, Jane Marie (Benny) McMunn and Lois Carla (Randy) Drumhiller; one daughter-in-law Rhonda Netzhimer, eleven grandchildren, Jennifer, Timothy, Jedediah, Amanda, Carla, Kyle, Cassandra, William, Kristina, Vanessa and Wessley; one great granddaughter Evelyn; many cherished extended family members and many friends.

Netzhimer, Loretta Jane, a resident of Deatsville, AL, went home to the Lord on Friday, November 6, 2020. Funeral services will be held on November 12, 2020 at 11:00 a.m. at St. Joseph&#8217;s Catholic Church in Prattville with Father James... View Obituary & Service Information

The family of Loretta Jane Netzhimer created this Life Tributes page to make it easy to share your memories.

Send flowers to the Netzhimer family.