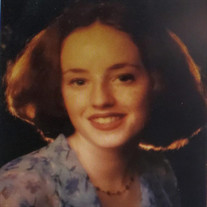 MARGARA, Kerri Lynne, 40, resident of Prattville, AL, went home to be with the lord on Saturday, February 20, 2021. Kerri was preceded in death by her maternal grandparents, Charles and Nancy Gann; her paternal grandparents, James and Virginia Whittle; and uncle, Chuck Gann. She is survived by her two children, Alexander Joe Margara and Shelby Lynne Margara; her parents, Dale and Donna Whittle; two sisters, Leann Ingram (Coot) and Mary Catherine Whittle; nieces, Kennedy Ingram and Kaiden Brock; nephew, Jensen Ingram; uncle, Mickey Gann (Sophia), cousins April Wardlow (Jim), Michelle Wilson (Patrick), Haley McGlothlin (Jake), and numerous extended family members and friends. Kerri was born at Maxwell Air Force Base on January 20, 1981, and traveled with her family from Alabama to Hawaii, Texas, Guam, and California, before her dad retired in 1995 and they settled in Prattville, AL. While her family was stationed in California, she started establishing herself as an athlete, first in fast pitch softball, and then basketball. As an eighth grader, at Edwards Air Force Base, CA, she led her basketball team to the eighth-grade championship winning most valuable player honors in the process. Upon arriving in Prattville, AL with her family, in 1995, she continued her basketball career, as a ninth grader, at Prattville High School, and progressed until a serious leg injury, sidelined her for her entire junior year. She would return for her senior year and play an integral part in the team making it to the regional tournament in Troy, falling just short of returning to the state playoffs. Kerri was a fun-loving person and enjoyed having a good time with her friends and family. She was a devoted mother, and loved Alex and Shelby with all of her heart, and she will be watching over them from heaven. She will be missed by everyone who had the privilege to know her, as a kind and caring person. Visitation will be at Prattville Memorial Chapel and Gardens in Prattville, AL., at 1:00 pm, on Sunday, February 28, 2021, and a graveside service will follow at 2:00 pm.

MARGARA, Kerri Lynne, 40, resident of Prattville, AL, went home to be with the lord on Saturday, February 20, 2021. Kerri was preceded in death by her maternal grandparents, Charles and Nancy Gann; her paternal grandparents, James and Virginia... View Obituary & Service Information

The family of Kerri Lynne Whittle Margara created this Life Tributes page to make it easy to share your memories.