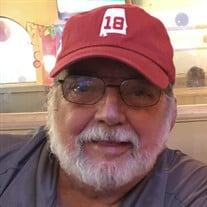 Joseph &#8220;Joey&#8221; Edwards Slocumb, 75, of Phenix City, AL, passed away peacefully on December 21st, 2021, in Montgomery, AL after spending several weeks in the hospital while attempting to recover from a mild stroke and complications... View Obituary & Service Information

The family of Joseph "Joey" Edwards Slocumb created this Life Tributes page to make it easy to share your memories.

Send flowers to the Slocumb family.