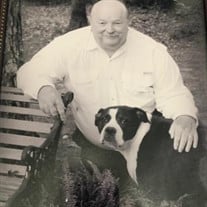 Harlow, John Wayne, 79, resident of Marbury, AL, went home to be with the Lord on Sunday, March 6, 2022. Funeral services will be held on Thursday, March 10, 2022 from Boones Chapel Baptist Church at 11:00 a.m. with Pastor Roger Boswell and... View Obituary & Service Information

The family of John Wayne Harlow created this Life Tributes page to make it easy to share your memories.

Send flowers to the Harlow family.