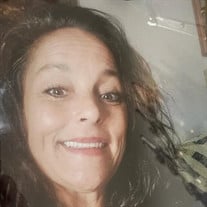 PETERSON-INAN, Jeanine Andrea, 43, a resident of Birmingham, AL, went home to be with the Lord on Thursday, June 2, 2022. Funeral services will be held on Sunday, June 5, 2022 at 1:00 p.m. from Prattville Memorial Chapel. Visitation will be... View Obituary & Service Information

The family of Jeanine Andrea Peterson-Inan created this Life Tributes page to make it easy to share your memories.

Send flowers to the Peterson-Inan family.