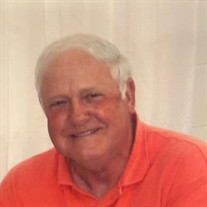 Prattville – James “Buddy” Stone, 71, of Prattville, Alabama went home to be with the Lord on May 16, 2020 after a lengthy illness. A visitation will be held on May 20, 2020 at nine-thirty a.m. at Glynwood Baptist Church. Funeral services, officiated by Mike Denning and James Jackson, will begin at eleven a.m. Interment will be at the National Cemetery in Montevallo on May 21, 2020 at eleven a.m. Buddy was born May 8, 1949 to Clifton Eldridge Stone and Verna C. Nichols Stone. He is survived by his wife of 45 years, Patricia Vinson Stone; daughter, Jennifer (Neil) Harris; son, Michael (Savannah) Stone; grandchildren, Ralston, Kendall, Kimberlee, Adrienne, and Kinsley; sisters, Myrtle Taylor, Minnie Vinson, Angerine (Charles) Hughey, Elodean (Arnold) Vinson, and Verna (Harley) Harrison; brother-in-law, James Pugh; and a host of nieces and nephews. He was preceded in death by his parents; brothers Claude and William E. Stone; and sisters Ernestine Worrell and Martha Pugh. Buddy served two tours in Vietnam as a Military Policeman, United States Army. After discharge, he joined the Alabama National Guard and the military became his career. In 2005, after 36 years of active duty service he retired as Sergeant Major of the 122nd Support Group in Selma, Alabama. After retirement, Buddy enjoyed playing golf, Wednesday night domino games in Perry County, and spending time with family and friends. Buddy continued honoring his country and fellow Perry County veterans by placing flags on the graves of past servicemen on both Memorial and Veteran’s Day. He was greatly loved by his family and friends and will be missed by all who knew him. www.prattvillememorial.com

The family of James Lindon Stone created this Life Tributes page to make it easy to share your memories.

Send flowers to the Stone family.