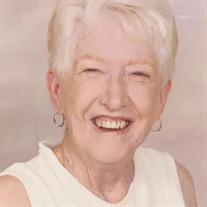 Iva Merrell “Rel” Townson – 82 of Prattville, AL passed away peacefully on Tuesday May 5, 2020 at Fellowship Home at Brookside in Valdosta, GA. Rel was born on September 1, 1937 in Autauga County, Alabama to the late Era (Baker) Manning Carr and Frank M. Manning. In 1958 she married Robert R. Townson, beginning her life as an Air Force wife and mother living and traveling many places in the US and overseas. Upon his passing she returned home to Prattville and worked 15 years for WalMart. After retirement she moved to Valdosta, GA to be closer to her son and his family. Along with her parents, Rel is preceded in death by her husband, Robert R. Townson, Sr. (USAF retired); 1 brother, Albert Manning; 4 sisters, Ara Carden, Margaret Avant, Doris Kennington and Juanita Jacks. Survivors include: Son and daughter-in-law, Robert Ray, Jr and Mellynn Townson of Valdosta, GA; Grandchildren: Mallory (Joshua) Chappell of Brunswick, GA, R. Ryan (Rebecca) Townson of Powder Springs, GA and Tyler R. Townson of Woodstock, GA; Great Grandchildren: Grafton and Cooper Chappell, JoeMack Townson, and joining in heaven, her triplet great granddaughters Mary-Alice, Madison-Joe and Bexley-Anne Townson. In addition, Rel leaves behind numerous nieces, nephews, extended family members and beloved friends. The family would like to express a special “Thank You” to the nurses, CNAs and every member of the staff at Fellowship Home at Brookside for the TLC they provided Rel. Per her wishes, Rel is returning to her home state of Alabama for burial at Prattville Memorial Chapel and Memory Gardens. Her family will hold a graveside service this Saturday afternoon, officiated by Pastor Tony Butler, Fountain of Grace Alliance Church, where Rel was recorded into membership in 1948. Messages of kindness may be left for her loved ones at www.musicfuneralservices.com and www.prattvillememorial.com. The Townson family is being cared for by the staff at Music Funeral Services, Valdosta, GA and the staff at Prattville Memorial Chapel and Memory Gardens, Prattville, AL.

The family of Iva Merrell "Rel" Townson created this Life Tributes page to make it easy to share your memories.

Send flowers to the Townson family.