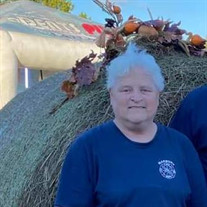 BARBER, Elizabeth Ann Jackson, 60, resident of Deatsville, AL, went home to be with the Lord on Saturday, February 19, 2022. Funeral services will be held on Thursday, February 24, 2022 at Prattville Memorial Chapel at 11:00 am with Matt Hall... View Obituary & Service Information

The family of Elizabeth Ann Jackson Barber created this Life Tributes page to make it easy to share your memories.

Send flowers to the Barber family.