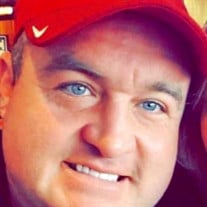 &#8220;So we are always confident, because we know that while we are living in the body, we are away from our home with the Lord. We live by faith and not by sight. We are confident, and we would prefer to leave the body and to be at home with... View Obituary & Service Information

The family of Dustin Ellis Knight created this Life Tributes page to make it easy to share your memories.

“So we are always confident, because we know that while we are...

Send flowers to the Knight family.