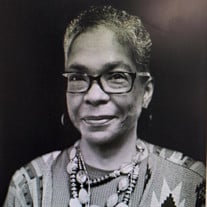 Mrs. Desiree P. Murray (nee Allen) was born on March 17, 1965 to the late Frank H. Allen, Jr. and Sheela (nee Rowe) Allen-Stephens in Rome, New York. Desi received her high school education at Westmoreland High School in Westmoreland, New York and was a member of the proud "Class of 1983". Mrs. Murray was employed by United States military and after 9 years of devoted service she received her bachelor’s degree in accounting at Midwestern State University and master’s degree in MBA at Troy State University. She was also a member of Friendship Baptist Church in Anniston, AL. Desi was united in Holy Matrimony to the late, Rickey Murray, on February 9, 1985 at Maxwell Air Force Base, Montgomery, Alabama. From this union came two sons: Eric and Desmond. Mrs. Murray departed from this life on September 15, 2020 at her home in Chester, Virginia. She was predeceased by her father, Frank H. Allen, Jr.; her mother, Sheela Allen-Stephens; and her son, Desmond. She is survived by and leaves to cherish her son, Eric Murray of Hampton, VA.; her brother, Frank Allen of Springfield, VA., her nephew, Isaiah Davis-Allen of Baltimore, MD.; her niece, Josephine Davis-Allen of Springfield, VA., her nieces, Stephanie and Saniyah Murray of Dallas, TX., her nephew, Ronald (Latoya) Murray Jr. of Irving, TX., her two brothers-in-law, Randy Murray of Anniston, AL. and Ronald (Debra) Murray of Grovetown, GA.; her aunt, Jean Menzies of Manhattan, NY.; her cousins, Renée Rowe, Bryan Rowe, Savonnah Rowe, Sheila Williams, Dianne Russell, Mondreka (Keisha) Hendrix, and Wynika (Eddie) Palmer; and a host of other family members and friends. A viewing in the Virginia area will be held at Morrissett Funeral Service, North Chesterfield, VA on Saturday, September 26 from 3:00 p.m. until 5:00 p.m. A second viewing will take place in Alabama and will be held at Prattville Memorial Chapel, Prattville, AL on Saturday, October 3 from 12:00 p.m. until 1:00 p.m. with the burial to follow. In lieu of flowers please send donations to the American Cancer Society.

The family of Desiree P Murray created this Life Tributes page to make it easy to share your memories.

Send flowers to the Murray family.