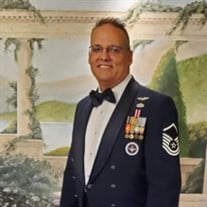 Christopher Lowell Dixon (Golden Boy), 53, of Prattville, Alabama; just newly moved into their new family home. Left this earthly world on 7 September 2021 at 0900 at Prattville Baptist Hospital. Chris was born in Richmond, Virginia November 17 1967 by his parents, Roland and Ruth Dixon and raised in Winchester, Virginia until 1978 then moved to Waynesboro, Pennsylvania. He was a band member in High School and a community band. He played the piano and sang in the high school young men's choir. After graduating from Waynesboro Senior High School, Chris left in June 1986 to join the United States Air Force. He then went to tech school for law enforcement. His first duty station was in Athens, Greece. His second was RAF, England, followed by Castle AFB California and Whiteman AFB Missouri. Chris was on TDY in Eskan Village, Saudi Arabia where he met the love of his life, Crystal Lowry at the time, in 2001. Then he went to Charleston AFB, South Carolina, final duty station in Altus AFB, Oklahoma. He spent time in many different countries in between his career. Chris was a K-9 Trainer and a C-17 Loadmaster. After 21 years, retiring in 2007 he left for Iraq to serve as a civilian K-9 handler for 3 years. On to Maui, Hawaii as a civilian police officer then finally to McConnell AFB Wichita, Kansas which was his last job for the Air Force. In 2015 Chris became an ATF investigator and he loved that job. In 2019, Chris graduated from Southwestern College with Bachelor degree of Science in Security Management. Chris was an amazing husband, father, son, brother and friend. He loved God, he tried to show Jesus’ love by all that he did for others. He never met a stranger. Always willing to help others in any way he could. When Chris first moved to Alabama he started going to Taylor Road Baptist Church. He felt so much love by the people he met that he began to feel as if they were his family. Chris was such a proud daddy, he cherished both of our daughters. Never missed an event when he was home. He treasured his daughters, always putting them before himself and wanting to do more for them. Chris’s love for Crystal was so precious and beyond measure, shown in his actions and his smile on his face. Just as with his daughters, he always put Crystal's needs and wants before his own. Once married on 18 September 2004 in Inola, , they built a wonderful life full of joy and adventure with God as a steady compass. They built a life that others would model a love that young people would strive to have. Chris was never afraid of the hard work it took to achieve all his goals. He was blessed to have been part of an amazing love story. Chris is survived by his parents Roland and Ruth Dixon of Orangeburg, South Carolina, his wife Crystal Dixon of Prattville, Alabama, his daughter Kaitlyn Dixon of Derby, Kansas, his daughter Emily Dixon of Prattville, Alabama, his Aunt Adena Richardson of Greensburg, Kentucky.

The family of Christopher Lowell (Golden Boy) Dixon created this Life Tributes page to make it easy to share your memories.

Send flowers to the Dixon family.