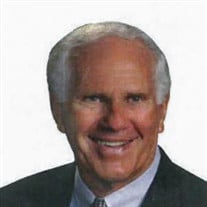 Byron Scott Chambliss August 5th, 1924 - May 22, 2020 Mr. Byron Scott Chambliss of Montgomery, Alabama, was welcomed into heaven's gates on the morning of May 22nd, 2020, at the age of 95. Mr. Chambliss was living at the Colonel Robert L. Howard State Veterans Home in Pell City at the time of his passing. Byron was born in 1924 in Prattville, Alabama, where he lived until his family moved to Birmingham. He grew up during the Great Depression and was introduced to football on the sandlots of Ensley, where his father, a Navy Veteran of World War I, worked in the steel mills. Byron became an All-State football player at Woodlawn High School. He graduated in 1943 and married Ann Dickas of Birmingham. Not long after, Byron enlisted in the army. He served in Germany and the Philippines during World War II as a combat infantryman, a member of an anti-tank crew, and as a physical fitness instructor. He served with the 86th Infantry Division in Germany and earned the American Campaign Medal, the European-Asian-Middle East Campaign Medal, the World War II Victory Medal, the Pacific Theatre Medal, and the Good Conduct Medal. After completing his service, he was recruited to play football for the University of Alabama, where he played from 1946-1948 and graduated with a Bachelor of Science in Physical Education in 1949. He played his last year of eligibility at Livingston State College, where he earned first-team All-Conference and second-team All-American honors. Following college, he played semi-pro baseball and coached football at Livingston and Thompson high schools for seven years before beginning a highly successful career in insurance and real estate in Birmingham with his growing family. Byron was active in civic affairs in Birmingham, serving as a founding member and president of the Sertoma Club, helping to organize and raise funds for the Alabama Sheriff’s Boys Ranch and helping to establish St. John’s Methodist Church, which began meeting in one of his properties until the church was built. Chambliss retired to Montgomery, where he lived near his children and grandchildren until 2019. In 2008, he was invited on an Honor Flight to visit the World War II Memorial in Washington, D.C., a memorable trip he was proud to be a part of. Byron was an avid runner, a horse enthusiast and loved gospel music, ice cream, and sharing stories about Jesus with his children and grandchildren. Byron loved his Lord and Saviour Jesus Christ and left a rich legacy full of love for family, faith, and country. Byron is preceded in death by his father, Jessie Allen Chambliss, his mother, Irene Scott Chambliss, his brother Jack Lee Chambliss, and grandson Hunter Alan Chambliss. He is survived by his brother Bobby Allen Chambliss (Melanie) and seven children: Dan Chambliss (Marcia), Sam Chambliss (Renee), Gordon Chambliss (Lisa), Dave Chambliss (Sherrie), Terry Ann Chambliss Beers (Ron), Matthew Chambliss (Kari), and Anna Rhea Chambliss Reid (Jonathan). His seventeen surviving grandchildren include Jen Wallace Yarbrough-Lapke, Amie Smith Teske, Casey Chambliss, Amee Shea Morgan Calloway, Webb Chastain, Rachel Beers Fisher, Emily Chambliss Merrick, Rebecca Beers Frederick, Jessica Chambliss, Nathan Chambliss, Samuel Chambliss, Peyton Chambliss, Grant Chambliss, Sarah Dalton Chambliss, Wyatt Chambliss, Whitney Chambliss, and Tallulah Reid. A celebration of life service will be held on Friday, May 29th at 11 o’clock for family only at Prattville Memorial Chapel with a graveside service to follow at Prattville Memorial Gardens. In lieu of flowers, gifts may be made in his honor to the Alabama Boys and Girls Ranches or the charity of your choice.

The family of Byron Scott Chambliss created this Life Tributes page to make it easy to share your memories.

Send flowers to the Chambliss family.