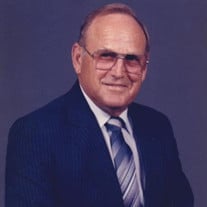 Burgin Virgle “B.V.” Ray, Jr., the beloved patriarch of his family, passed away on Friday, August 27, 2021 at the age of 95 at home in Prattville. Even at a young age, he served as a father figure for his brother and sisters. At the age of 18, he married his childhood sweetheart and the love of his life, Emogene Lowery. They were married almost 70 years until her death in 2015. He was awarded The Purple Heart while in the Army’s 362nd Field Artillery Battalion serving in Germany and The Philippines. Originally from Chilton County, he was active in his community for decades, both in Prattville and in Thorsby. He was a Mason, Worthy Patron of Eastern Star; member of the Lion’s Club, First Baptist Church of Thorsby, First Baptist Church of Prattville, and subsequently East Memorial Baptist Church. He retired from AT&T in 1978. He loved to cook and fish, and was an avid gardener. He loved to watch college football and never missed watching a University of Alabama football game. B.V. was a loving husband, father, grandfather and great-grandfather. He was preceded in death by his wife, Emogene “Jean” Lowery Ray; parents, Martha Phenia Lewis and Burgin Virgle Ray, Sr.; sisters, Helen Ray Tubberville, Deedie Ray Goss, and Betty Ray Armstrong; and son-in-law Joseph Martin Curvin. He is survived by his son, L. Eric Ray (Patsy) of Talladega; daughter, Ginger Ray Curvin of Birmingham; grandchildren, Brandy Ray Cobbs (Jerry) of Decatur, Dr. Rachel Curvin Garner of Tupelo, MS, Jeffrey Martin Curvin (Susan) of Berry, Brandon Ashley Gaither of Glenmoore, PA, and Glenn “Chip” Gaither of Gaithersburg, MD; sister, Margie Ray Price of Hartselle; brother, Jack N. Ray of Cullman; five great-grandchildren and many nieces and nephews. Service will be at 1:00 on Wednesday, September 1, 2021 at Prattville Memorial Chapel, with visitation one hour preceding the service. Burial will be at Thorsby Memorial Cemetery, Thorsby, AL.

The family of Burgin Virgle Ray Jr. created this Life Tributes page to make it easy to share your memories.

Send flowers to the Ray family.