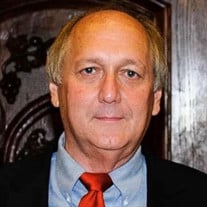 Benjamin Edward Abernathy was born in Connelly Springs, North Carolina on July 6, 1947 and transitioned to Heaven on January 6, 2021 in Montgomery, Alabama. Ben was preceded in death by his parents James William Abernathy and Lorena Alexander Abernathy, brother Dr. David Myles Abernathy and sister Laura Abernathy Lowman. He is survived by his siblings Jean Berry, Nan Day, Jim Abernathy, twin sister Beverly Masters, and Rose Roberts. Benjamin graduated from Brevard College with a degree in Liberal Arts and Clemson University with a degree in Industrial Engineering, then enlisted in the Army. He was employed by Union Camp/International Paper as their Safety Manager for 30+ years prior to retirement. Ben had many great loves in his life that included anything to do with his beloved Clemson Tigers, photography, music, electronics and the people he loved. If you were a friend to Ben, you were a friend for life. If he loved you, be assured that you were loved for life. John Owings was Ben’s life-long best friend from Clemson. Family was everything to Ben and was a father and PawPaw to many, whether by love or birth. Blythe Katherine Taylor was his first baby whom he met at six months of age. Matthew Benjamin Abernathy and Ashley Lauren Janes (Charles) were his other two children to follow. Being a PawPaw was truly the highlight of his life. His grandchildren include Aiden Lawrence Brown, Sophie Rose Brown, Elizabeth Chandler Taylor, Peyton Kelli Tayor and Sawyer Thomas Agro. He “adopted” other grandchildren along the way which include Willa and Grayden Gibson, and every single one of his grandbaby’s friends. You knew you were loved when he granted you with a nickname. Ben was an uncle to numerous beloved nieces and nephews. Prior to becoming a father, he “adopted” his great niece Hope Hastings as his own. Hope was the first of many children he loved in his life and he was always intentional to let everyone know that Hope was his first baby. Our Prattville community embraced this Carolina guy and his family is eternally grateful for the love, friendship and care bestowed upon him. Debbie Stinson, April Stinson Underwood, Gene and Kathy Canavan, Joe and Katie Lindsey, Jason and Shayna Parlette, the angels at the Montgomery Cancer Center and our Mann Dance family are all precious and dear to our hearts.

Benjamin Edward Abernathy was born in Connelly Springs, North Carolina on July 6, 1947 and transitioned to Heaven on January 6, 2021 in Montgomery, Alabama. Ben was preceded in death by his parents James William Abernathy and Lorena Alexander... View Obituary & Service Information

The family of Benjamin Edward Abernathy created this Life Tributes page to make it easy to share your memories.

Send flowers to the Abernathy family.