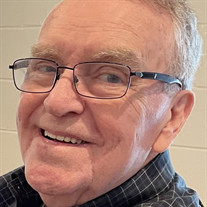 COOPER, Andrew Levy, 81, resident of Prattville, AL, went home to be with the Lord on Friday, September 24, 2021. Graveside services will be held on Monday, September 27, 2021 at 2:00 pm from Prattville Memory Gardens with Elder Tom Corley and... View Obituary & Service Information

The family of Andrew Levy Cooper created this Life Tributes page to make it easy to share your memories.

Send flowers to the Cooper family.